TEHRAN (defapress)- Supreme Leader of the Islamic Revolution Ayatollah Seyed Ali Khamenei lashed out at US officials’ unauthorized trips to their military bases in the countries of the region, describing such moves as insulting to the regional nations' independence and freedom.
News ID: 79420 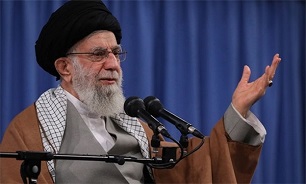 “Americans come [to the region] and enter a country like Iraq without any permission, do not visit the country’s government, do not go to the country’s capital; they have bases there, and just go to their own base,” Ayatollah Khamenei's official website tweeted early on Friday, apparently in a fresh reaction to US President Donald Trump’s unannounced visit to Afghanistan on Thursday.

“This means they officially insult the freedom of nations and the independence of nation,” the tweet added.

On Wednesday, Ayatollah Khamenei pointed to the former Soviet Union’s invasion of Afghanistan in early 1980s, and recalled that Imam Khomeini, the late founder of the Islamic Republic, had ordered the Iranian government to summon the Soviet ambassador over the illegal entry.

“At that time, the world said ‘you are countering the United States, do not confront the USSR for now’, but the Imam did not accept such a point of view,” Ayatollah Khamenei said.

Trump landed at the US base Bagram airfield in Afghanistan on Thursday and served Thanksgiving dinner to American troops before meeting with Afghan President Ashraf Ghani.

During the visit, the US president claimed the Taliban militant group had accepted a ceasefire to facilitate talks with Washington.

"The Taliban wants to make a deal and we're meeting with them and we're saying it has to be a cease fire," the US president, on his first trip to the war-torn country, told reporters.

“We are talking to the Taliban,” Trump said.

“We will see if the Taliban wants to make a deal,” he said during his meeting with Ghani. “If they do, they do. If they don’t they don’t. We were getting close.”

The Taliban, however, rejected Trump’s gesture of ceasefire on Friday, saying it was "way too early" to speak of resuming direct talks with Washington.

"It is way too early to talk about the resumption of talks for now. We will give our official reaction later," Taliban official spokesman Zabihullah Mujahid said.

There are some 13,000 US troops still deployed to Afghanistan, 18 years after the United States invaded after the September 11, 2001 attacks. Trump claimed he planned to reduce the number to 8,600.

During his surprise visit, Trump said US troops will remain in Afghanistan until a peace deal is made or a total victory is achieved.

Washington wants the Taliban to stop attacking its forces in Afghanistan under a peace deal, but the militants want American forces to leave the country.

The US invaded Afghanistan in October 2001 under the pretext of eliminating the Taliban militant group.

Late in October, Iran's Judiciary Chief Seyed Ebrahim Rayeesi lashed out at Washington for pursuing a seditious policy in the Middle East, saying that the US is implicated in all miseries and crimes in the region.

Speaking in Tabriz, the regional capital city of Northwestern province of East Azerbaijan, Rayeesi said that all the crimes in the region are committed by the US.

"Americans have face failure in all the measures they have taken against us and if they do not do anything more it means they can do no more," he said.