TEHRAN (defapress)- A massive gas project worth $1.5 billion is underway in Southeastern Iran where the country’s oil ministry is conducting a major pipe laying operation to supply the deprived and remote regions bordering Pakistan with natural gas.
News ID: 79663 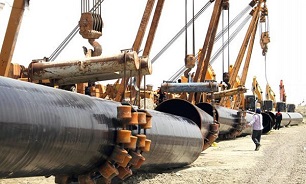 Head of the National Iranian Gas Company Hassan Montazer Torbati said on Sunday that the oil ministry is investing more than $1.5 billion on completing the national gas grid in the Southeastern province of Sistan and Baluchistan where the works to link up cities and towns of the province to the national gas network had made a significant progress over the past months.

He added that expanding the gas pipeline network in the sprawling province had become the flagship project of Iran’s natural gas sector.

Sistan and Baluchistan, the second largest but one of the poorest of the 31 Iranian provinces, has become a focal point of government’s development plans over the past years.

That province has a long coastline on the Sea of Oman where Iran is seeking a massive expansion of the maritime and port infrastructure to facilitate regional trade.

The completion of the gas grid in the province would be a great boost to businesses in the port of Chabahar, Iran’s largest Ocean port which is being developed through partnership with India, the country that seeks access to markets in Afghanistan and countries in Central Asia through Sistan and Baluchestan.

Montazer Torbati said gas network was more than 76 percent complete in the provincial capital of Zahedan, where some 31,000 households had now access to the utility service, adding that construction of pipelines and other installations was going on simultaneously for seven other cities in the province.

He said a total of 310 factories and industrial units across the province will be linked to the gas network, including 81 that have already started using the service.

The official said that linking Chabahar to the national grid would pave the way for massive development of petrochemical industries on the Sea of Oman.

He said a 300-kilometer pipeline is under construction to link the port city to the city of Iranshahr, located to the center of Sistan and Baluchistan.

Late in September, Iranian Oil Minister Bijan Namdar Zanganeh said that his country is working on the development of refineries and petrochemical complexes along Makran coasts, a region comprising about 1,500 km of shoreline along the Sea of Oman and the Indian Ocean.

“The Makran region should be further developed and oil is able to do that,” he said today, adding, “The project to transfer oil from Gureh in Bushehr province to Jask in Hormuzgan province via pipeline has been ratified and refinery and petrochemical units are being established incrementally.”

Jahangiri said that Makran shores should be turned to a hub for development and progress in Hormuzgan and Sistan and Baluchistan provinces.

He went on to say that tackling the issues of Sistan and Baluchistan province requires a national effort and it should be put on the agenda of all executive bodies.

Chabahar city is one of the most important ports located on Makran shores, and is officially designated as a free trade and industrial zone by the Iranian government.

Due to its free rade zone status, the city has increased in significance in international trade.