TEHRAN (defapress) – Iranian ambassador to the UK, Hamid Baeidinjead, said the report on the British embassies’ downsizing in Iran and Iraq was ‘fake news’.
News ID: 79821 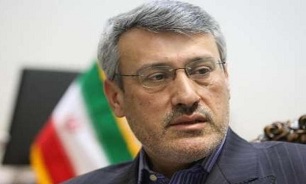 “Bizarre to see @skynews - once a Murdoch outlet - put out fake news about UK downgrade in diplomatic presence, as I was literally today in an FCO meeting to EXPAND the presence in Tehran,” Baeidinjead wrote in a tweet on Tuesday.

“16 yrs after Iraq invasion, UK public is being misled again. By the same people,” he added.

The Iranian ambassador was referring to a report by the London-based Sky News television news channel in which it was claimed that Britain had reduced staff at its embassies in Iran and Iraq to a minimum level due to security concerns after the assassination of Lt. Gen. Qasem Soleimani, a top Iranian general in a US terrorist assault.

“The withdrawal of the diplomats from both countries is a precautionary step rather than based on specific intelligence of a threat,” the report had cited diplomatic sources as saying.