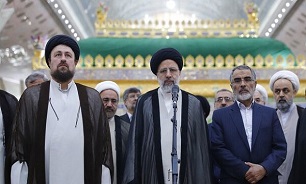 Enemy of the country left no stone unturned and tried to undermine the real image of the Islamic Revolution but it [enemy] could not succeed, he said, adding, “enemies waged various conspiracies against the country since the Islamic Revolution in 1979, one of these conspiracies is related to the eight years of Sacred Defense (Iraqi imposed war against Iran in 1980-1988).”

The Judiciary system of the country has been formed based on the Islamic laws and jurisprudence during these forty years since the victory of the Islamic Revolution, Raeisi added.

Today, message of the late Imam Khomeini (RA), Leader of the Islamic Revolution and noble nation of Islamic Iran is the message of resistance against enemies, Judiciary Chief Raeisi stressed.