TEHRAN (defapress) – Parliament Speaker Alli Larijani said Iran is interested in expanding its cooperation with Lebanon, but at the same time, it does not oblige the Arab country to accept assistance.
News ID: 80262 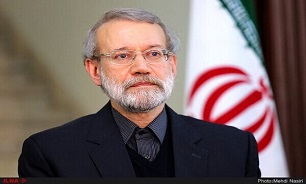 Larijani made the remarks in an interview with ‘Lebanon 24’ while he was in Beirut on Sunday.

He emphasized that the Lebanese nation is the only party that can solve the problems of its own country. He added that the Lebanese people will reach ‘the safety of the shore’ whenever they decide, but putting trust in countries such as Saudi Arabia and the UAE would be a mistake, because “their words would be nothing more than empty promises.”

Larijani then said economic cooperation between Iran and Lebanon depends on the request of the Lebanese government, stressing that this requires continuous coordination, communication and cooperation between the two sides, and that “we will not force anyone to take any measure in this regard.”

Regarding regional issues, Larijani stated that, contrary to certain assumptions, the Islamic Republic of Iran has no intention to infiltrate a country, adding “Iran’s presence in Iraq and Syria is no secret matter, but rather it is at the official request of their respective governments.”

Larijani further dismissed claims of Iran having a military base in Syria, adding “interference in the internal affairs of an independent state has never been part of Iran's principles.”

He also added that those claims of US-Russia coordination to prevent the spread of Iran's influence in the region were completely unfounded.