TEHRAN (defapress) – Foreign Minister Mohammad Javad Zarif said that all the countries except three terrorist regimes are in favor of FATF’s extension of the deadline.
News ID: 80281 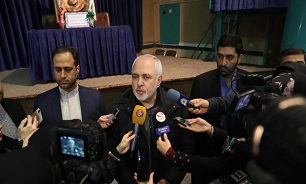 “Almost the vast majority of the speakers who spoke during the meetings of Financial Action Task Force (FATF) in the past few days were in favor of extension of deadline for Iran,” said Foreign Minister Zarif, adding, “But three countries of United States, Saudi Arabia and Israel regime which support terrorism, are against the extension of the deadline.”

“We have to see what will happen today,” he said.

The Paris-based Financial Action Task Force (FATF), a global anti-money laundering body, has given Iran a final deadline of February 2020 to implement a set of four bills to meet the standards set by the watchdog.

The Expediency Council is in charge of deciding the fate of the two other bills, namely one on Iran’s accession to the United Nations Convention against Transnational Organized Crime, commonly known in Iran as ‘Palermo’, and the other one a bill amending Iran’s Combating the Financing of Terrorism (CFT) law.

Meanwhile, The Wall Street Journal claimed on Thursday that the Task Force will blacklist Iran in Friday's session of the body.