TEHRAN (defapress) – Secretary of Iran’s Supreme National Security Council (SNSC) Rear Admiral Ali Shamkhani, in a tweet upon his arrival to Baghdad on Sunday morning, named ties of Iran and Iraq as inseparable ones.
News ID: 80441 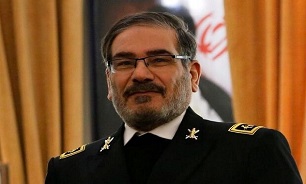 "Iran and Iraq can not be separated," he wrote.

He also commemorated Martyrs Lt. Gen. Sloeimani and Abu Mahdi al-Muhandis, who were assassinated in airstrikes, less than two months ago in Baghdad by direct order of the US President Trump.

Shamkhani left Tehran for Baghdad on Saturday at the head of a high-ranking political and security delegation.

Meeting with heads and leaders of Iraqi political movements is of the other programs during Shamkhani’s visit to Iraq.