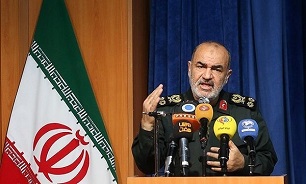 "The US has not given up on its expansionist strategy and is seeking to impose its dominance on other countries," said Salami in a ceremony for delivering drones and choppers to the IRGC navy in Bandar Abbas.

"This is the difference between leaders who govern the world with wisdom and those who lack wisdom. Thoughtful leaders who rule the world wisely multiply their friends, but leaders lacking political wisdom who are in decline, increase their enemies," he added.

Referring to the role of the United States in normalizing the relations between the UAE and Bahrain with the Zionist regime, Salami said, "They make a relationship between the rulers of the reactionary regimes and the Zionists so that the Islamic Ummah will hate them."

He continued, "Can American officials walk alone on one of the streets of a small Islamic country today? They cannot because all nations are against them."

"We are getting stronger every day," IRGC chief said.

Sating that even the American people are now chanting the slogan "Down with USA", Salami said, "We see nothing in the US but smoke, fire, poverty, racism, and the polarization and lack of freedom."

"On the contrary, we are firmly and steadily increasing our power here, and we will never stop. We are increasing the range of our weapons," he highlighted.

IRGC chief went on to say, "Today, our navy is not just limited to the surface of the seas and it is an air-based sea force which is utilizing different kinds of drones, helicopters and seaplanes, and at the same time enjoys considerable power in the field of submarines."