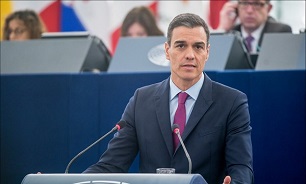 ox, which is echoing the conservative-led Madrid regional authority’s opposition to the new restrictions implemented via a state of emergency, has also called for protests, Reuters reported .

The measures affecting 3.8 million people in the Spanish capital and eight satellite towns include a ban on non-essential travel except for work, school or medical reasons.

Around 7,000 police are deployed to ensure compliance.

Vox leader Santiago Abascal said his party, Spain’s third largest, would appeal in the constitutional court against the “illegal” state of emergency. Opponents say the measures in Madrid are excessive and will crush the economy.

But Sanchez told a news conference that health should come before politics.

“We have to be united. This is an epidemiological battle, not ideological,” he said.

Spaniards are bemused and angry over the political bickering, as their nation suffers the highest COVID-19 caseload in Western Europe and its worst recession since the civil war.

“I feel frustrated, deceived, I feel afraid because I see that we are in the middle of political disputes that lead nowhere,” said Miguel Angel, 63, a Madrid resident.

The Madrid region had 723 coronavirus cases per 100,000 people in the two weeks to October 8, according to the World Health Organization, making it Europe’s second densest cluster after Andorra.