All Weapons Must Be Pointed at US Positions in Iraq

TEHRAN (defapress)- Amid threats of a US war against Iraq’s anti-terrorism resistance groups, a prominent faction of Iraq’s Popular Mobilization Units — better known as Hash al-Sha’abi —reiterated its readiness to end the US military presence in the Arab country, saying all weapons should be pointed at American positions on Iraqi soil.
News ID: 82285 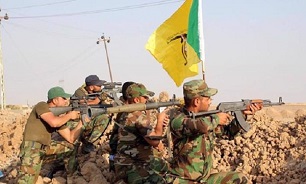 In a statement on Tuesday, Abu Ali al-Askari, a senior Kata’ib Hezbollah commander, said that the resistance group was prepared to keep up armed resistance to the continued US military presence in Iraq, presstv reported.

The statement called on the resistance forces to continue to identify, deploy to, and take aim directly and indirectly at the interests of the enemy and its bases and military equipment, whether on the ground or in violation of Iraqi airspace.

Askari asked the Iraqi forces to be in a state of maximum readiness so that nothing will be left of the enemy, if the need arises, and the only thing that could save them will be political movements leading to a timetable for the withdrawal of American troops from Iraq.

The Iraqi security official further urged the resistance fighters to keep an eye on Israeli delegations that constantly visit some US bases in Iraq.

He said that the resistance group should prepare daily reports to inform the Iraqi people about the Israeli-American intrusions of Iraqi airspace.

Weekly reports should also be prepared to reveal the sabotage activities of the American enemy and its spy services and to disclose the true number of US troops, their weapons and movements, he added.

Askari pointed to an earlier statement by Iraqi resistance groups, which announced a halt to military operations against US and foreign forces in Iraq to allow them to leave the Arab country, emphasizing that the “conditional opportunity” given to the enemy would end undeniably.

In a joint statement on Saturday, Iraqi resistance groups agreed on a conditional ceasefire to American forces present in Iraq, saying they would halt their military operations against the US troops, including rocket attacks, providing that Washington does not persist in maintaining their presence in the Arab country.

Kata’ib Hezbollah is an anti-US unit operating under the PMU, which includes more than 40 militia groups fighting terrorism.

The latest statement comes days after reports emerged of an “imminent” American war as Washington threatened to target dozens of Iraqi sites linked to the Arab country’s resistance groups if it follows through with a recent threat to close its embassy in Baghdad.

According to a report by the Middle East Eye (MEE) news portal, the United States has drawn up a list of 80 Iraqi sites linked to Iraq resistance groups.

PMU fighters have played a significant role in the liberation of areas held by Daesh (ISIL or ISIS) terrorists ever since the group launched an offensive in the country in 2014, overrunning vast swathes in lightning attacks.

Back in November 2016, the Iraqi parliament voted to integrate the PMU, which was formed shortly after the emergence of Daesh, into the military.

Washington blames Kata’ib Hezbollah for dozens of rocket attacks against US installations and forces in Iraq. The group denies carrying such attacks.

Smaller and murky factions have so far claimed some of those anti-US attacks.

The heavily fortified Green Zone in Baghdad, which hosts foreign diplomatic sites and government buildings, has been frequently targeted by rockets and explosives in the past few years.

Following the attack, Iraqi lawmakers unanimously passed a bill on January 5, demanding the withdrawal of all foreign troops.

Baghdad and Washington are currently in talks over the withdrawal of American troops.

Meanwhile, Iraqi resistance groups have vowed to take up arms against US forces if Washington fails to comply with the parliamentary order.