Forging Ties with Israel to Cause Insecurity, Iran’s President Warns

TEHRAN (defapress) – Iran’s President Hassan Rouhani described the Israeli regime as “the enemy of the entire region and Muslim nations”, warning that forging ties with the Zionist regime will only bring about insecurity and instability.
News ID: 82636 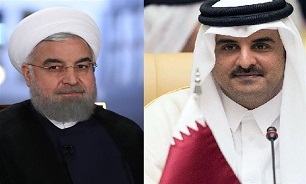 Regional countries should overcome the policy of coercion by outsiders and their reliance on foreign countries through wisdom, prudence, rationality and sincere dialogue in the region, Rouhani said on Wednesday in a phone conversation with Qatar's Emir Sheikh Tamim bin Hamad Al Thani.

“Unfortunately, getting the Zionist regime involved (in regional developments) will be a cause of insecurity and instability in the region. And it is really surprising to us that some neighbors consider their security to be tied with relations with the criminal Zionist regime, which is the enemy of the entire region and Muslim countries,” Rouhani said.

Stressing that regional countries can solve their problems as neighbors and brothers, Rouhani said,  “I have no doubt that in the coming months we will see better conditions in regional relations with the help of each other."

He expressed hope that with the new developments in international relations, the “hostile” policies of some countries in the region will be rectified, and “we will see an opportunity to strengthen dialogue and reach an understanding within the region.”

The Qatari emir, for his part, lauded Tehran-Doha ties as strategic and growing and stressed that the implementation of the agreements between the two countries serves the interests of the two nations.

He also said that Qatar will make every effort to implement those agreements.

On regional developments, Sheikh Thani said that cooperation between Iran and the Persian Gulf countries should be further developed in all areas, including ensuring maritime security in the region’s waters.

“In any agreement to ensure regional security, Iran should be a party to talks to reach an agreement,” he said.

Emphasizing that all regional countries have suffered from the irresponsible behavior of some countries in the region, he expressed hope that, given the new international developments, talks between Iran and the Persian Gulf countries will be resumed.

He also once again officially invited the Iranian chief executive to pay a visit to Doha.

The Iranian President’s remarks come in reaction to Israel’s forging ties with the United Arab Emirates and Bahrain under US-brokered agreements.

Following the September 15 signing of deals on normalization between Israel and the UAE and also Bahrain, US President Donald Trump announced on October 23 at the White House that Sudan and Israel had also agreed to normalize relations.

The normalization deals have drawn widespread condemnation from Palestinians, who seek an independent state in the occupied West Bank and Gaza Strip, with East Jerusalem al-Quds as its capital. They say the deals ignore their rights and do not serve the Palestinian cause.