TEHRAN (Defapress) - The Iranian Defense Minister said that Iran Aviation Industries Organization (IAIO) has always been a perfect model for the armed forces and the country in the field of countering oppressive sanctions.
News ID: 82932 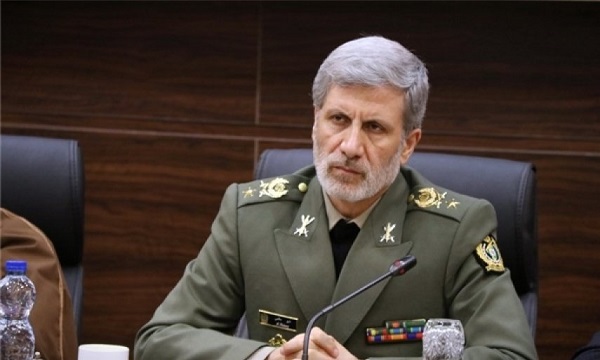 “Any time the enemies sought to impose more restrictive conditions, our industries moved towards greater self-sufficiency and prosperity”, Brigadier General Amir Hatami said on Saturday during a visit to the Ministry of Defense's Aviation Industry Organization to monitor the construction stages of the second Yasin advanced training jet.

The minister's remarks came in reaction to the recent US sanctions on seven entities related to Iran's shipping and transportation lines, including the IAIO.

Noting that Iran Air Force has been subject to tough sanctions for many years, he stressed, however, the aviation industry has always been a perfect model for the armed forces and the country in the field of countering sanctions.

He added, “Although the sanctions caused problems for the country, they made us focus our attention to domestic capacities and capabilities, therefore, today, despite the will of the enemy, Iran is far stronger and more powerful than in the early years of the Islamic Revolution.”

The experience of the Islamic Republic during the four decades (since the victory of the Islamic Revolution) has proven that the cost of surrendering to arrogant powers is far greater than the cost of resisting them, he said, stressing that Resistance is the best strategy to deal with such oppressive powers.

The US claimed that these entities have manufactured military equipment for Iran's military "to perpetrate its global terror campaign."