TEHRAN (Defapress) - Spokesman for Yemen Armed Forces said in a further explanation of yesterday's attack on the UAE that during “Operation Storm-3”, vital and strategic targets in Abu Dhabi and Dubai came under attack.
News ID: 83815 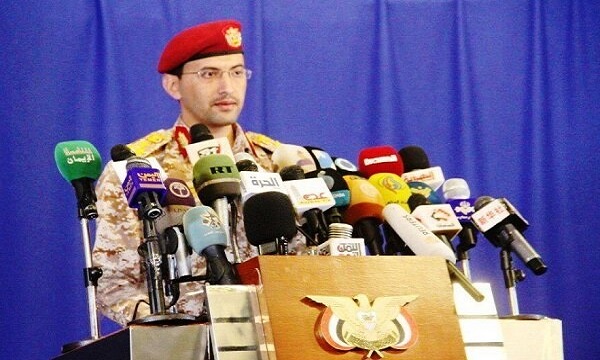 Brigadier General Yahya Saree in a statement issued on Monday announced that Yemen has carried out a large-scale military operation deep inside the UAE.

The UAE government will be insecure as long as it continues the aggression against the Yemeni people, Saree stated.

He once again warned Emirati citizens and companies to stay away from the country's vital centers due to their vulnerability to Yemeni attacks in the next phase, saying that Yemen would not leave the aggressions unresponded.

Several massive explosions ring out across Abu Dhabi's skies on Monday morning shortly after Yemen's armed forces said they are about to announce a large-scale counteroffensive against the United Arab Emirates' economic arteries.

Saudi Arabia, along with the United Arab Emirates (UAE) and with the green light of the United States and Western countries, carried out comprehensive attacks on Yemen since March 26, 2015, to prevent Ansarullah of Yemen from coming to power in the country.

Officials of the Yemeni National Salvation Government have repeatedly stressed that the Yemeni army and popular committees will continue to respond to the aggression as long as the Saudi coalition does not stop the war against Yemen and end the siege.

Tens of thousands of Yemenis have been injured and martyred in Saudi-led strikes, with the vast majority of them being civilians.

The coalition has been also imposing a blockade on the impoverished country’s ports and airports as a part of his aggression which is aimed at restoring power to fugitive former president Abdrabbuh Mansour Hadi.

Meanwhile, Yemen is home to the world’s largest humanitarian crisis, with at least 7 million people on the brink of famine and hundreds of thousands suffering from cholera.