TEHRAN (Defapress) - Iranian Foreign Minister Hossein Amir-Abdollahian on Sunday held a meeting with the EU coordinator of the JCPOA Commission Enrique Mora in Tehran and discussed Vienna talks with him.
News ID: 83978 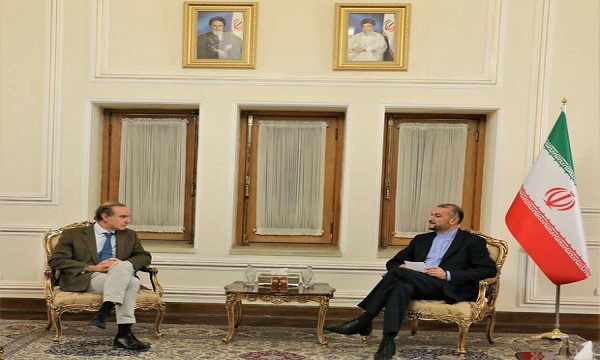 In the meeting, Hossein Amir-Abdullahian expressed his appreciation to the efforts made by the EU senior diplomats Josep Borrell and Enrique Mora and stated that the Islamic Republic of Iran has seriously participated in the Vienna talks and has taken the necessary initiatives to reach an agreement.

The Iranian foreign minister added that other parties, especially the US government must adopt a realistic approach to resolve the remaining issues.

The top Iranian diplomat also pointed out that the US administration lacks political will to lift the sanctions, which benefits the Iranian people economically.

Foreign Minister of Iran further described the US lack of the political decision to remove the sanctions on Iran as the main barrier to achieving the final results in the Vienna talks, stressing that the effective lifting of sanctions is a top priority for the Iranian side in the negotiations.

During the meeting, Enrique Mora, for his part, also presented a report on the latest state of the negotiations and his assessment of the way forward.

Emphasizing the seriousness and determination of the Islamic Republic of Iran to finalize the agreement in Vienna, Bagheri Kani said, "If the American side is realistic, an agreement can be reached."

The senior EU diplomat also presented a report on his latest consultations with the other JCPOA parties to Bagheri Kani.

Bagheri and Mora will continue the consultations closely in the coming days.

The top Iranian diplomat said earlier on Sunday that an agreement is close while there are a few important issues left.