TEHRAN (defapress) – A US Black Hawk helicopter crashed off the coast of Yemen on Friday and a search was under way for one US service member, the US military said.
News ID: 65728 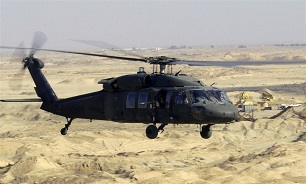 US Central Command said in a statement that five other service members aboard the aircraft had been rescued after the crash, which took place during a training mission about 20 miles (32 km) off the southern coast of Yemen at 7 p.m. (16000 GMT), Reuters reported.

A US official said the cause of the crash was under investigation.

"When the incident took place the helicopter was not very high above the water,” CENTCOM spokesman Colonel John Thomas said.

The United States has been aiding and abetting the Saudi regime in its aggression against Yemen, with at least 80 launched since the end of February.

Yemen’s defenseless people have been under massive attacks by the coalition for more than two years but Riyadh has reached none of its objectives in Yemen so far.

Over 12,000 Yemenis, including thousands of women and children, have lost their lives in the deadly military campaign.