Turkey-Europe Locked in War of Words as EU Summit Opens

TEHRAN (defapress) - Tensions with Turkey will be high on the agenda of the European Union summit this weekend, amid calls within the bloc to freeze relations.
News ID: 66532 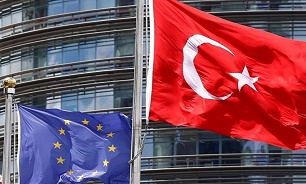 Turkish and European officials have been in a war of words, with Ankara accusing members of the EU of supporting "terrorism" and EU politicians alleging a deterioration of democratic and human rights in Turkey, Al Jazeera reported.

German Chancellor Angela Merkel has said that EU leaders would not make a decision on whether to freeze Ankara's EU membership bid during the upcoming summit in Brussels, which begins on October 18.

"We will certainly not take any decision, but I would like to listen to the views of my colleagues on bilateral relations with Turkey," she said in her weekly podcast on Saturday.

In September, in a televised debate before Germany's parliamentary elections, Merkel said that Turkey "should not become a member of the EU".

Merkel's ultimate aim is to convince other member states to approve suspending membership talks with Turkey, said Can Baydarol, the deputy chairman of the Ankara-based European Union and Global Research Association.

"However, after Emmanuel Macron's presidency in France, Berlin and Paris have been in a power struggle within the EU. It is not possible to achieve that consensus due to France's stance against such a move towards Turkey," Baydarol told Al Jazeera.

"France and certain other countries believe Turkey has a crucial role in the Middle East, given the currently ongoing multiple crises. This is the reason why Merkel recently said that they will not make a decision on suspension of talks in this summit."

Turkey and the EU have been cooperating on issues such as the refugee crisis, security and Syria's war - a situation that appears to have made some member states hesitant to cut ties.

As part of a 2015 deal, Ankara received EU funds in exchange for the return of refugees to Turkey, but questions remain over the efficacy of the agreement's implementation in light of the rising tensions.

Erdogan, accusing Brussels of not keeping its side of the deal about visa-free travel for Turks, various times threatened to open his country's border with the EU for refugees to pass freely.

The EU member states and Turkey also share intelligence and are allies in the coalition fighting the Daesh (also known as ISIL or ISIS) of Iraq.

But Turkish President Recep Tayyip Erdogan has sharply rebuffed the bloc in the recent months, stating publicly that his country "does not need the EU" any more.

"They do not accept us. But have they put an end to the [membership] process? No. They are wasting our time … If you're honest, make your statement and we will finish the job. We don't need you," Erdogan said in a public address this month.

The declining relations between Ankara and the EU took a dive in March when the Netherlands, Austria, Germany and Denmark banned Turkish ministers from addressing immigrants and expatriates in rallies within their borders for a referendum that changed Turkey's parliamentary system to an executive presidency a month later.

Dutch authorities actively intervened after a Turkish minister tried to reach a consulate in the country to address Turks living there, leading to a diplomatic crisis.

The members of the European Parliament (EP), an EU legislative body with limited influence over Turkey's membership talks, have at various times called for the process to be suspended in non-binding votes.

The latest was in July, when the EP called on the European Commission, the EU's executive body, and member states to "suspend the accession negotiations with Turkey without delay if the constitutional reform package is implemented unchanged".

The constitutional changes, passed in Turkey's April referendum, give the president to be elected in 2019 new powers to appoint vice presidents, ministers, high-level officials and senior judges. It allows the president to dissolve parliament, issue executive decrees and impose states of emergency.

Following the referendum, far-right parties in Germany, the Netherlands and Belgium had called for people with Turkish origins living in those countries to return to Turkey if they voted "Yes".

EU member states have been united in their condemnation of the Turkish government's detentions and purges of tens of thousands of people after a failed coup attempt in July 2016.

Local and international rights groups have accused the government of using the coup attempt as a pretext to silence opposition in the country.

The government has said that the purges and detentions aimed to remove from state institutions and other parts of society the supporters of Fethullah Gulen, a US-based, self-exiled religious leader on whom Ankara blames the attempted coup.

Ankara has alleged that EU states are harboring Kurdish and far-left fighters, as well as people linked to the failed coup.

"Germany is abetting terrorists," Erdogan said earlier this year, adding that Berlin did not respond to thousands of documents requesting extradition of suspects wanted by Ankara. The accusation was echoed by other top Turkish officials.

The Turkish president has also targeted the governments of Germany, Belgium, the Netherlands and non-EU Switzerland for allowing rallies in support of "terrorism" within their borders.

In one such rally in Switzerland in March, a banner showing a gun pointed at Erdogan's head was caught on camera.

Since the post-coup attempt arrests started, EU member states have discussed economic sanctions on Turkey, such as cutting EU aid.

"We will have to further cut back our joint economic cooperation with Turkey and scrutinize projects," Merkel said.

Those threats, however, were never implemented.

Austria, another staunch opponent of Turkey's EU bid, has on multiple occasions pushed to suspend talks, only to be rebuffed by other member states. Regardless, the talks have been practically frozen for years, with no progress made.

Baydarol told Al Jazeera that the European Commission's annual progress report on the membership talks with Turkey, to be released in November, would be an important follow-up to this weekend's summit, as the report is expected to sharply criticize Turkey.

"Taking these criticisms in the report and the Commission's recommendation into consideration, the EU leaders might make a concrete decision on Turkey's EU bid in the coming summits," he said.