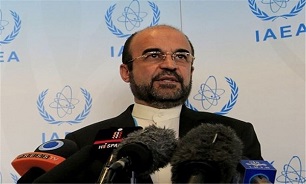 "The agency’s new report, which is the ninth since the day of implementing the JCPOA and the 8th seasonal verification report submitted to the IAEA board of governors, contrary to US claims, once again confirms that Iran’s nuclear activities are in full compliance with the JCPOA,” Najafi said on Monday.

Najafi also stressed that Iran and other member states of the IAEA expect the agency to proceed with its "professional and impartial” work and verify the JCPOA implementation based on safeguard standards.

The remarks came as concerns have been growing in recent weeks that the US administration may unilaterally scrap the nuclear agreement between Iran and the Group 5+1 (Russia, China, the US, Britain, France and Germany).

In a major confrontational stance against Iran on October 13, US President Donald Trump refused to certify the multilateral deal on Tehran’s peaceful nuclear program.

Speaking from the White House, Trump said he will choose not to certify that Tehran is complying with the agreement.

Since the historic deal was signed in Vienna, the IAEA has repeatedly confirmed the Islamic Republic’s compliance with its commitments under the JCPOA, but some other parties, especially the US, have failed to live up to their undertakings.