TEHRAN (defapress) – Hundreds of Thousands Iranians from every walk of life poured into the streets in cities across the country on Friday to voice their protest against US President Donald Trump’s planned move to relocate the US embassy from Tel Aviv to al-Quds (Jerusalem).
News ID: 67322 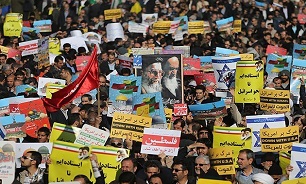 In the nationwide protests held after Friday prayers in Tehran and other cities, the Iranian people chanted various slogans against the Washington and Tel Aviv regimes, including "Down with the US,” and "Down with Israel.”

The demonstrators condemned Trump’s decision to recognize al-Quds as the capital of the Israeli regime and voiced their support for the Palestinian people and the holy city.

The rallies came after Trump officially declared the disputed city of al-Quds Israel's capital, despite warnings from around the world that the measure risks triggering a fresh wave of violence in the Middle East.