TEHRAN (defapress) – Iranian President Hassan Rouhani said the recent “mistake” made by US President Donald Trump to declare al-Quds (Jerusalem) the capital of the Israeli regime has made Muslims to adopt a more unified approach to the Palestinian issue.
News ID: 67620 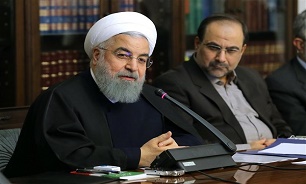 Speaking at a meeting of Iran’s Supreme Council of the Cultural Revolution in Tehran on Tuesday, Rouhani briefed participants in the meeting on a recent summit of the Organization of Islamic Cooperation (OIC), which was held in the Turkish city of Istanbul to coordinate a response to a US decision to recognize Quds as Israel’s capital.

“The US president’s mistake of declaring the relocation of the country’s embassy to the holy Quds made Muslims more unified on the issue of Quds and Palestine,” he noted.

The move was part of a plot against Palestine and the Muslim world that has backfired, Rouhani said, adding that today, a new intifada (Palestinian uprising) has been formed against the Zionist regime of Israel.

Trump officially declared the disputed city Israel's capital, despite warnings from around the world that the measure risks triggering a fresh wave of violence in the Middle East.