TEHRAN (defapress)- The US State Department issued a warning over probable penalties against corporations engaged in the construction of the Nord Stream 2 gas pipeline, claiming that the Russian project undermines energy security in Europe.
News ID: 69336 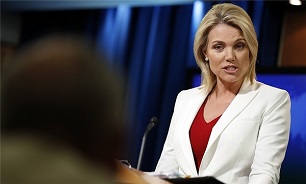 “As many people know, we oppose the Nord Stream 2 project, the US government does,” State Department Spokesperson Heather Nauert said during a news briefing, RT reported.

“We believe that the Nord Stream 2 project would undermine Europe's overall energy security and stability. It would provide Russia [with] another tool to pressure European countries, especially countries such as Ukraine,” she added.

The pipeline project was started in 2015 as a joint venture between Russia's Gazprom and its European partners, including France’s Engie, Austria's OMV, German Uniper and Wintershall, as well as British-Dutch multinational Royal Dutch Shell.

The pipeline, running from Russia to Germany under the Baltic Sea, is set to double the existing pipeline’s capacity of 55 billion cubic meters per year.

The Spokesperson said that Washington could introduce punitive measures against the participants of the energy project.

The measure could be implemented by means of a provision in the Countering America’s Adversaries Through Sanctions Act (CAATSA).

“At the State Department, we have spent a lot of time speaking with our partners and allies overseas to explain to them the ramifications of CAATSA and how an individual or a company or a country can run afoul against CAATSA and fall into sanctions," she said.

"We don't tend to comment on sanctions actions but we've been clear that firm steps against the Russian energy export pipeline sector could – if they engage in that kind of business – they could expose themselves to sanctions under CAATSA,” the Spokesperson added.

Germany, along with the other EU nations, has repeatedly expressed an interest in implementing the Nord Stream 2 project. However, the pipeline has been fiercely opposed by the minor members of the bloc, including Poland, Latvia, Lithuania, Romania and Hungary.

At the same time, the Ukrainian authorities stand firmly against the project, as the future pipeline would bypass Ukraine and deprive its budget of transit fees.

Earlier this week, 28 Senate Republicans and 11 Democrats signed a letter, urging the White House to use all tools at its disposal to prevent the construction of Nord Stream 2.

This gives Washington an extra tool to identify and sanction US and foreign entities that support Russian companies, the letter said.