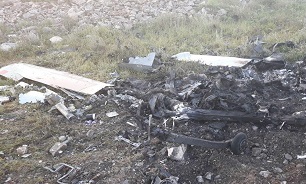 The accident happened in an area located between Beit Hanoun and Bereshit villages.

The Lebanese media outlet did not mention the reason behind the accident.

According to Al-Manar the drone was targeted by a missile before its crash.

Israeli drones and jet fighters flying over Lebanon is something routine.

Lebanon has protested many times against the violation of its airspace.