TEHRAN (defapress) – Iranian President Hassan Rouhani deplored the Washington government’s negative role in the ongoing crisis in Syria and said the “illegal” military presence of the US will only increase problems of the Arab country in resolving the crisis.
News ID: 72235 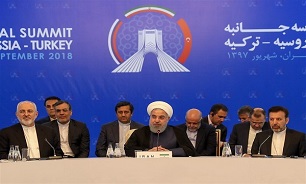 “Obviously, we should not expect the US government to play a positive and constructive role in this regard with its illegal presence in Syria and its acts of aggression and occupation as well as its support for the Zionist apartheid regime,” Rouhani said during a trilateral summit with his Russian and Turkish counterparts, Vladimir Putin and Recep Tayyip Erdogan, in Tehran on Friday.

“The US' illegal meddlesome measures in Syria are not consistent with any international regulation and increase the problems that already exist in the country,” he said, adding that such moves by the US only poses a serious challenge to achieving lasting peace in Syria.

The Iranian president further raised six key points about ways to end the crisis in Syria and highlighted the importance of close cooperation between Iran, Russia, and Turkey as a reliable reference point for restoring peace in Syria and for long-term cooperation at the regional and global stages.

In the Name of Allah, the Most Beneficent, the Most Merciful

We would like to extend our warmest welcome to you.

Today’s summit is being held in continuation of the successful efforts of the three countries within the framework of the Astana Process to effectively confront terrorism and put an end to the Syrian crisis, based on the demands of the majority of the Syrians. This summit is also an opportunity to discuss our joint actions in the current and future stages.

Given the complexities of the Syrian crisis, it was very important for the three countries of Iran, Russia and Turkey to achieve a common framework based on the fundamental principles of preserving territorial integrity and integrity of Syria and respect for national sovereignty and the right of the Syrian people to determine the future of their country in attempting to quell the flames of war in Syria

From the outset, we have emphasised the inefficiency of a military solution to ending the Syrian crisis, and we are now pleased that after seven years of the Syrian crisis and based on the experience gained, the settlement of the Syrian crisis and other similar crises in the region through peaceful means has become a popular belief among the dominant actors. Our efforts over the past years, especially after concentrating activities in the context of the Astana Process, have always been based on facilitating Syrian-Syrian dialogue and encouraging the government and the opposition to join the process.

Here, I would like to pay tribute to the spirit of all the martyrs who have opened up the path to the fight against terrorism by sacrificing their lives, and express my respect for efforts at the regional and global stages, including by the United Nations over the past years to shut down the crisis in Syria, and I am proud to announce, on behalf of the Astana Process partners, that our joint efforts have contributed to nearly ending the fighting and bloodshed in Syria, stopping terrorist activities in Syria and its long-term risks for the region and the world, and providing ground for a constructive dialogue between the Syrian people.

The Islamic Republic of Iran’s presence in Syria is at the request of the Syrian government and to fight terrorism in the country, and the continuation of this presence will be on this basis. At the same time, this presence, neither in the past nor in the presence, has not been -and will not be- aimed at imposing its opinion, and will support the will of the Syrian people as a friendly nation.

Fighting terrorism is a common international demand, but when the implementation of these demands comes within the framework of the recognized borders of another state and nation, it will not be possible to do so unless it happens through explicit request and clear consent of that country. We understand the concerns of some countries in the region about the threat of terrorism and separatism, but we consider cooperation with the Syrian government the most effective and lasting way to address these concerns, and believe that other solutions, including through direct intervention and without coordination with the Syrian government, will lead to the deepening of the crisis.

On the other hand, combatting terrorism requires a comprehensive approach by taking into account all aspects of this unpleasant phenomenon. With the same viewpoint, the fight against terrorism in Idlib is an integral part of the mission of restoring peace and stability to Syria, but this combat must not hurt the civilians and lead to the policy of burning land. We are fighting for peace, and war for war is, in our view, the wrong way that groups and terrorist regimes have taken. The ultimate goal, be it in Syria or in the whole region, is peace, but to achieve a lasting peace we have no choice but to fight terrorism.

No plan for combatting terrorism can be complete without paying attention to its origins. Those responsible for occupation, terrorism, aggression, foreign interference and discrimination, such as the United States and the Zionist Regime, and some other sponsors of terrorism, cannot change their position from the accused to the plaintiff by hurling accusations. The Zionist Regime, as an occupational regime that is based on ethnic and religious discrimination, whose existence has been formed with occupation, aggression and instability, cannot claim to be fighting terrorism, and the immediate withdrawal of this occupying regime from the occupied territories of Syria is the common desire of all the Syrians in accordance with international conventions.

Obviously, we should not expect the US government to play a positive and constructive role in this regard with its illegal presence in Syria and its acts of aggression and occupation as well as its support for the Zionist apartheid regime. The US' illegal meddlesome measures in Syria are not consistent with any international regulation and increase the problems that already exist in the country and poses a serious challenge to achieving lasting peace in Syria.

The continuation of the presence of hundreds of thousands of Syrian refugees in neighbouring countries will have a negative impact on them; therefore, we should provide the ground for their immediate return to their home land. The international community should help the Syrian government to rebuild Syria. The return of refugees and reconstruction of Syria will undoubtedly contribute to the ceasefire and national dialogue and accelerate the process of reconciliation in the country.

In any solution to the future of Syria, the Syrian people have the main and ultimate role, and the efforts of the United Nations and the representatives of the three countries solely guarantee the peace process in continuous interaction with the Syrians to help the Syrians and provide the foundation for the constitutional committee, continued combatting terrorism, humanitarian relief, the return of refugees, the reconstruction of Syria, and the withdrawal of foreign troops from Syria.

In outlining the future of Syria, the ethnic and religious diversity of the Syrian society must be considered and respected away from pressure, threat, or interference of foreigners. The bitter experience of foreign interference in Libya and the collapse of the Libyan government and political system, and the experience of sending weapons and terrorism to destroy Syria is enough for the Syrian people and the nations of the region and the world to confront with any kind of foreign interference and pressure. As a democracy in the region, we believe that the path of democracy does not go through the gun barrel. Freedom is a social, popular, and national demand, and any kind of militarism creates a false sense of violence, whether in the form of terrorism or in the form of external interference.