TEHRAN (defapress)- Former commander of the IRGC Mohsen Rezayee underlined that investigations have indicated that the terrorists who launched the Saturday attacks on military parades in Southwestern Iran had received orders from foreign countries.
News ID: 72642 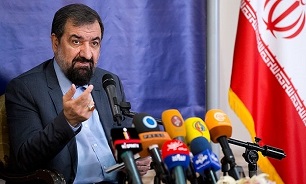 "The incident in Ahwaz was fully masterminded outside the borders and it is completely evident which countries support the terrorists financially and with propaganda," Rezayee, who is now the secretary of Iran's Expediency Council (EC), said, addressing the funeral ceremony of tens of Iranian people killed in Ahwaz city on Saturday.

He, meantime, stressed that Iran's might and security is so strong and deeply rooted that enemies are not to undermine the country.

29 people were killed and 70 were injured in the Saturday morning attack by al-Ahwaziya terrorist group during the nationwide military parades in Iran's Southwestern city of Ahwaz.

The terrorists attacked the bystanders watching the annual Armed Forces' parades, marking the start of the Sacred Defense Week, commemorating Iranians' sacrifices during the 8 years of the Iraqi imposed war on Iran in 1980s, in disguise of the Islamic Revolution Guards Corps (IRGC) and Basij (volunteer) forces, killing and wounding several people, including innocent women and children.

None of the officials participating in the military parades in Ahwaz city in Khouzestan province was injured in the attack.

Spokesman of the Iranian Armed Forces Brigadier-General Abolfazl Shekarchi told FNA that 4 terrorists carried out the attack during military parades in Ahwaz, noting that three of them were killed and the last one was captured by security forces.

He added that none of the terrorists could escape, noting that other reports about the details of the attack are not confirmed.

Meantime, Head of the Islamic Revolution Guards Corps Public Relations Department and IRGC Spokesman General Ramezan Sharif said that the terrorists who attacked people during the Armed Forces' parades in Ahwaz were affiliated to al-Ahwaziya stream which is nourished by Saudi Arabia.

He added that the terrorists aimed to overshadow the magnificence of the Iranian Armed Forces' parades.

General Sharif said that people were also invited to watch the parades and the terrorists both fired at people and the Armed Forces.

He said that such attacks are precedent and al-Ahwaziya terrorist group had earlier fired at the convoys of people who visited the Southern cities of Iran which resisted against Saddam's aggression during the 8-year Iraqi-imposed war against Iran in 1980s.

l-Ahwaziya terrorist group has in recent years attempted to foment insecurity in Iran with unlimited support from a Saudi-Israel stream as Tehran increased its influential role in the region.

Spokesman of al-Ahwaziya terrorist group Yaqoub Hor Tastari in an interview with Iran International, a Persian-language opposition channel, from Copenhagen in Denmark claimed responsibility for the Saturday terrorist attack against the military parades in the Southwestern city of Ahwaz in Iran which killed 29 and wounded 70 others, including civilians.

Al-Ahwaziya declared start of operation in 1999 with its main base in London and its senior leaders have not been shy of acknowledging affiliation to the Persian Gulf Arab states. It has also branches in Egypt, the UAE and Saudi Arabia. The group held its annual conference in Cairo last year. It has the illusion of forming a new country by separating Khouzestan, Bushehr and Hormozgan provinces and the Persian Gulf islands from Iran.

Al-Ahwaziya terrorist group's activities are in line with Sheikh Khaz'al's separatist group who received the Great Britain's knighthood over 70 years ago. Also Abdolhamid al-Khaz'al, the grandson of Sheikh Khaz'al participated in al-Ahwaziya group's conference in Cairo in January 2017. On the sidelines of the conference, he thanked the US republicans for inviting him to Washington and declared Trump administration's promise for studying financial support for al-Ahwaziya.

After the developments related to the Arab Spring in the region, al-Ahwaziya tried to increase its terrorist acts. Attempts to sow discord among different tribes and Arab-Iranian conflicts as well as leading certain street unrests in Khouzestan province are among the acts carried out by the separatist group.

A number of terrorist acts and attempts to foment insecurity in Iran by al-Ahwaziya terrorist group are as follows:

Over 10 blasts in different towns of Khouzestan province between 2005 to 2006, the most important of which was detonating a bomb in the office of Ahwaz city's governor which killed 11 and wounded over 87 people.

Blast in the oil installations of Ramshir city in September 2013.

The group also claimed in 2015 that it has detonated several oil pipelines near Ahwaz.

Blast in oil pipelines in January 2017.

Assassination of the head of Iran's intelligence ministry in Ramshir Hossein Sharifi in 2017 along with several others accompanying him.

Meantime, Shirzad Kamangar, one of the ringleaders of PJAK (the Party for Free Life of Kurdistan) terrorist group, participated in al-Ahwaziya grouplet's conference in Copenhagen on December 12, 2015, stressing support for al-Ahwaziya.