TEHRAN (defapress) – Dozens of Rohingya Muslims in Myanmar and Bangladesh have boarded boats to try to reach Malaysia, officials and aid workers said on Thursday, raising fears of a fresh wave of such dangerous voyages after a 2015 crackdown on people smugglers.
News ID: 73582 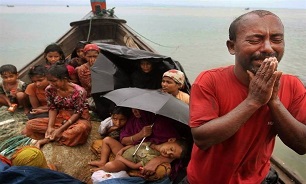 One boat attempted to set sail from the southern coast of Bangladesh on Wednesday, the coast guard said, while several vessels left Rakhine state in western Myanmar, according to Rohingya leaders, aid workers and a monitoring group.

Officials detained 33 Rohingya and six Bangladeshis aboard a fishing boat bound for Malaysia in the southeastern part of the Bay of Bengal, said Foyezul Islam Mondol, the head of the coast guard in southeastern Teknaf upazila.

A spokeswoman for the UN refugee agency in Myanmar said the organization had heard “similar reports” of boats leaving the country but could not confirm their location.

“With the prospect of boat movements increasing following the end of the monsoon season, it is increasingly urgent for the authorities to take measures to address the root causes of displacement...and create conditions which foster social cohesion and economic opportunities for all communities,” the spokeswoman said.

A Myanmar government spokesman could not be reached for comment. Kyaw Swar Tun, deputy director of the Rakhine state government, said he was unaware of any boats leaving.

More than 700,000 Rohingya, members of a persecuted Muslim minority, fled Rakhine following an army-led crackdown in August last year, settling in sprawling Bangladeshi refugee camps, according to UN agency figures, while hundreds of thousands remain inside the country in internal displacement camps and villages.

Refugees say soldiers and local Buddhists carried out mass killings and rape during the violence last year, while the United Nations has accused the military of “genocidal intent”. Myanmar has denied almost all the allegations.