TEHRAN (defapress) – Chief of General Staff of Iranian Armed Forces Bagheri has warned countries in the south of Persian Gulf not to invite the United States to the region.
News ID: 74679 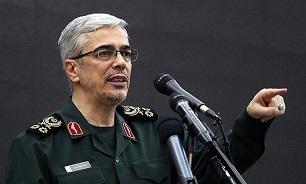 Major General Mohammad Hossein Bagheri, Chief of General Staff of Iranian Armed Forces, made the remarks on a trip to Abu Musa Island in the Persian Gulf region to see the preparedness of the Iranian troops there.

Bagheri described the exemplary security in the Strait of Hormuz and the Persian Gulf as the fruit of the sacrifices and capabilities of the Iranian armed forces, adding “the security of the Persian Gulf has been achieved through the presence of forces and the use of the most up-to-date military equipment.”

He said that Iranian regional enemies know that the Islamic Republic of Iran has a strong and decisive presence in the region despite its peaceful doctrine, stressing that Iran defends the integrity of its borders with all might.

The chief of general staff of Iranian armed forces further warned some countries located in the south of Persian not to invite the United States to plot in the region, adding that  they will have to bear the consequences of possible US measures against Iran.

He also warned some countries in the region not to rely on the United States, referring them to its withdrawal from of Syria after several years of violence and chaos.

Bagheri hailed Iran’s peaceful approach in history saying "the Islamic Republic of Iran is always a harbinger of friendship and peace, adding “even it holds military exercises under the same banner.”

“Providing security in the region is only achievable through cooperation of all the countries of the region, while the presence of foreigners has been an obstacle on the way of reaching this goal,” he underlined.