Juncker Calls for Extra Push Ahead of UK Brexit Vote

TEHRAN (defapress)- The European Union and Britain's prime minister are seeking new ways to avoid a no-deal departure of the UK from the bloc but the EU Commission president insists there cannot be a renegotiation of the draft Brexit deal.
News ID: 74906 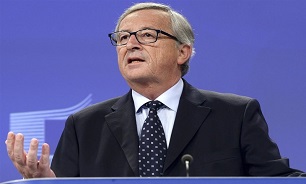 Jean-Claude Juncker said Friday that despite the difficulties of British Prime Minister Theresa May to get the deal through parliament, he continues to hope she can pull it off next Tuesday, AP reported.

To help her get the deal through, "We are checking with Downing Street what the clarifications could amount to," he said, adding: "They should not be confused with a renegotiation."

"I don't like the prospect of a no deal. It would be a catastrophe," he said on a visit to Romania, which has taken over the rotating EU presidency.