Iran Blasts US Interventions as Cause of Chaos

TEHRAN (defapress)- Iranian Foreign Minister Mohammad Javad Zarif, in a Twitter post, asserted that Washington’s interventionist policies have always caused chaos, repression, and resentment in the world, quite contrary to claims made by US Secretary of State Mike Pompeo.
News ID: 74929 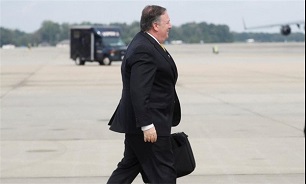 “Whenever/wherever US interferes, chaos, repression, and resentment follow,” Zarif tweeted on Thursday in response to Pompeo's remarks in Egypt which raised eyebrows in the United States and abroad.

US Secretary of State Pompeo once again repeated unfounded and baseless accusations against Iran and said, “Preconditions that Washington have determined for continuation of talks with Tehran remain in place.”

Pompeo described the US as a “force for good” in the Middle East in a speech at the American University in Cairo, which contradicted President Donald Trump's announcement last month to pull troops out of the region.

In his Thursday tweet, Zarif said, “The day Iran mimics US clients & @SecPompeo’s ‘human rights models’ — be it the Shah or current butchers — to become a ‘normal’ country is the day hell freezes over. Best for the US to just get over loss of Iran.”

The Iranian top diplomat was referring to Iran’s former dictator Mohammad Reza Pahlavi who was the US’s staunch ally and his monarchy was toppled by the Islamic Revolution of 1979.

In a related front, earlier in mid-April 2018, Iranian Parliament Speaker Ali Larijani blamed the US adventurism for the spread of terrorism in the region.

"We have witnessed terrorist clashes in Iraq, Syria and Afghanistan in the past and one of its root causes is the US military aggression in the region," Larijani said in a meeting with President of the National Assembly of the Republic of Vietnam Nguyen Thi Kim Ngan in Hanoi.

"Experience shows that anywhere the US has intervened militarily, the terrorist groups have initiated action there immediately after, and the Americans practically play a role in the creation and spread of terrorism," he added.

Larijani said that the recent US attacks on Syria disclosed that Washington is against the establishment of tranquility in the country, and added, "The westerners use the chaos in the region to sell their weapons but we are determined to make the regional conditions secure."

In relevant remarks in February, Secretary of Iran's Supreme National Security Council (SNSC) Ali Shamkhani warned of the US dangerous policies against global peace, adding that Washington is resuscitating the terrorist groups in the Middle-East and North Africa.

"The US national security strategy and nuclear doctrine in the new era is a serious threat to global peace and violates the UN Charter, and all deterrent measures are required to prevent this madness," Shamkhani said at a meeting with Dutch Foreign Affairs Minister Sigrid Kaag in Tehran.

He underlined that the ISIL terrorist group has been annihilated in West Asia through extensive cooperation and coordination between Iran, Syria, Iraq and Russia, and said, "Extensive evidence indicates the US relentless attempts to revive the armed terrorist groups in the region and North Africa which shows that the country doesn’t attach any importance to global security."