US in Talks with France, Britain to Prolong Syria Presence

TEHRAN (defapress)- US National Security Adviser John Bolton stated that he has discussed a long-term military presence in Syria with his British and French counterparts, despite an order by President Donald Trump to evacuate American troops from the Arab country.
News ID: 76120 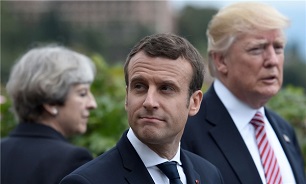 Speaking to ABC News on Sunday, Bolton was hopeful that Britain and France would also join the US efforts to prevent Daesh’s resurgence.

"It hasn't happened formally yet, but they're looking at it. I think it's very important that we try and get this up. The ISIS (Daesh or ISIL) threat, the al Qaeda threat, the terrorist threat is an ideological threat worldwide and it's something that I think we have to be vigilant against for the foreseeable future," he said using another acronym for Daesh.

Bolton reaffirmed Trump's assessment of Daesh’s defeat in Syria but cautioned that the threat still persisted because members of the group were spread around the world.

"We know that's not the case. We know right now that there are ISIS fighters scattered still around Syria and Iraq, and that ISIS itself is growing in other parts of the world. The ISIS threat will remain," he noted.

The remarks once again highlight Washington’s shifting messages since Trump’s announcement of a swift withdrawal from Syria.

In a video posted to Twitter in December, Trump declared that "we have won against ISIS" and "it’s time for our troops to come back home" from Syria. Back then, the American president said he had directed his commanders to complete the process in three months.

While some of the nearly 2,000 US troops in Syria have already moved to the neighboring Iraq but the process has reportedly come to a halt to address concerns in Washington.

Last month, the Trump administration announced that some 400 American troops will stay in Syria indefinitely after the withdrawal was completed to allegedly protect allied Kurdish militants in Syria from possible Turkish attacks while keeping an eye out for Daesh’s reemergence.

Bolton announced Sunday that the decision was out of concern that Daesh could regain its footing.

"One reason that the president has committed to keeping an American presence in Iraq and a small part of an observer force in Syria, is against the possibility that there would be a real resurgence of ISIS, and we would then have the ability to deal with that if that arose," he added.

Last week, General Joseph Votel, commander of US Central Command which oversees US military operations in the Middle East, said the fight against Daesh was "far from over".

He told the House Armed Services Committee that Daesh had made a "calculated decision" to preserve its resources and wait "for the right time to resurge".