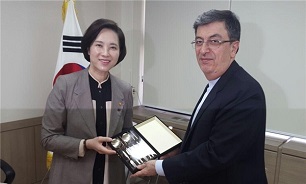 The Korean official described Iranian students studying at the country's universities as brilliant and talented, and said that her country will try to offer more facilities to receive more Iranian students.

The two sides also emphasized the necessity of strengthening the scientific, academic ties between the two countries.

Currently, some 400 Iranian students have enrolled in South Korean universities with 80 percent of them studying at graduate courses.

The number of Iranian students at Korean universities has increased by 100 percent over the past three years.

Iran has sealed countless agreements with academic centers and universities across the globe, in a bid to expand academic cooperation and conduct joint research projects.

On December 28, it was announced that Iran's Ministry of Science, Research and Technology and the Federal Ministry of Education and Research (BMBF) of Germany have reached an agreement to conduct a host of joint academic and research projects.

On December 12, Iran’s leading academic center, the University of Tehran, and Malaysian University of Putra signed a Memorandum of Understanding (MoU) to pave the ground for a joint research project on social responsibility.

Earlier in September, Head of the Atomic Energy Organization of Iran (AEOI) Ali Akbar Salehi announced that his country stands first in West Asia in terms of scientific progress.

In relevant remarks in June, Iranian Vice-President for Science and Technology Sorena Sattari announced that the country ranked 15th in the world in producing science and stood 7th in nanotechnology.

"In the past 1.5 years, the Islamic Republic of Iran has ascended three steps and is now standing among the 15 pioneering science production nations in the world," Sattari said.

Noting that Iran ranked 7th in advanced nanotechnology, he said, "We have plans to rank 5th in this field."