TEHRAN (defapress) – Iran and Iraq share same interests and face with similar threats and regarding the volume of bilateral contractions it is vital for the military forces of the two countries to boost cooperation to lift any possible threat, the Chief of General Staff of the Iranian Armed Forces Maj. Gen. Mohammad Hossein Bagheri said on the sidelines of his Sunday meeting with his Iraqi counterpart Gen. Othman Al-Ghanimi.
News ID: 76664 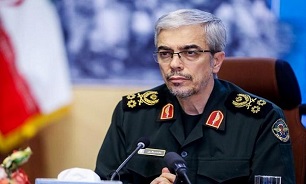 The two Generals also addressed reopening of Khosravi border to facilitate journeys between the two countries, development of air defense cooperation at the joint borders to deter probable threats, and also doing some joint military exercises besides sharing related experiences.

According to General Bagheri, during this meeting, the two sides also discussed issues such as the urgent dredging Arvand Rud (Shatt al-Arab) according to the made agreement between the senior Iranian and Iraqi officials.

As accorded, the two countries’ armed forces will provide the security of the procedure, he said.

Iraq has assured us that the presence of the American military forces in this country is merely restricted to training Iraqi forces and they are doing their job under the control of the Iraqi military force, General Bagheri added.

As reported earlier, during the Sunday meeting in Tehran, the Iraqi commander praised the status of bilateral cooperation between the two countries, hoping for a further boost in different sections.

Al-Ghanimi also described yesterday’s meeting between Iranian President Hassan Rouhani and the Prime Minister of Iraq Adil Abdul-Mahdi as effective. Iraq will not let others use its soil against Iran, he quoted Iraqi PM as saying in the meeting.

Heading a high-ranking delegation Iraqi PM arrived in Tehran on Saturday for a two-day official visit.