TEHRAN (defapress) – Iran’s defense minister said blocking the financial channels that are trying to provide relief to flood-stricken people across Iran, shows the US government’s true face and proves its deep animosity against the Iranian nation.
News ID: 76665 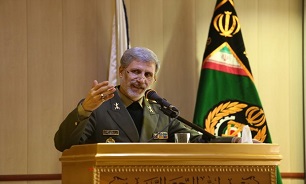 Pointing to the devastating floods, which have been gripping people across the country in the past two weeks, Brigadier General Amir Hatami said on Sunday that freezing the financial accounts of the Iranian Red Crescent due to the US' economic sanctions against the Islamic Republic shows Washington's true face and deep animosity against the Iranian nation.

The top military chief, however, noted that despite what some western countries expected, the great people of Iran, who have proved their unity in the face of hardships, are firmly standing by the rescue teams and the armed forces, to help their flood-affected compatriots.

General Hatami stressed that the Defense Ministry, using all its capacities and equipment, as well as the technical and engineering expertise, will do its best to help salvage the damages as soon as possible.

Exceptionally heavy rains since March 19 have flooded some 1,900 cities and villages across Iran, claiming 56 lives, according to Interior Minister Rahmani Fazli, and causing hundreds of millions of dollars of damage to Iranian agriculture. Floods have affected several provinces in the north and west of the country including, Golestan, Mazandaran, Lorestan, and Khuzestan.