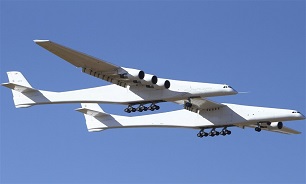 The mega jet carried out its maiden voyage over the Mojave Desert.

It is designed to carry into space, and drop, a rocket that would in turn ignite to deploy satellites.

It is supposed to provide a more flexible way to deploy satellites than vertical takeoff rockets because this way all you need is a long runway for takeoff.

It was built by an engineering company called Scaled Composites.

The aircraft is so big its wing span is longer than a football field, or about 1.5 times that of an Airbus A380.

The plane flew Saturday for about two and a half hours, Stratolaunch said. Until now, it had just carried out tests on the ground, AFP reported.

“Today’s flight furthers our mission to provide a flexible alternative to ground launched systems,“ he added.

Stratolaunch was financed by Paul Allen, a co-founder of Microsoft as a way to get into the market for launching small satellites.

But Allen died in October of last year so the future of the company is uncertain.