Tripoli Gov't to Sue Haftar at ICC over Rocket Attacks

TEHRAN (defapress)- The head of the UN-recognized Government of National Accord (GNA) in Tripoli on Wednesday vowed to sue Khalifa Haftar, commander of East Libya-based forces, before the International Criminal Court (ICC) over deadly rocket attacks in the capital.
News ID: 76891 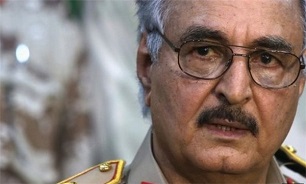 Sarraj asserted that his government will lodge legal files that document the violations committed by Haftar at ICC.

The attacks came amid fighting in the capital since Haftar launched a military campaign earlier this month to capture Tripoli, where the GNA is based.

The United Nations on Wednesday described the latest series of rocket fire in Tripoli as the "heaviest fighting" since the outbreak began, and strongly condemned the shelling.

A barrage of shells struck the Abu Salim neighborhood and districts of Algrarat and Salahuddin in the capital late Tuesday.

"Tripoli witnessed the heaviest fighting since the outbreak of the clashes with indiscriminate rocket fire on a high density neighborhood in the Libyan capital," Stephane Dujarric, the spokesman for UN Secretary General Antonio Guterres stated at a news conference at the UN headquarters.

The spokesman also mentioned the remarks of the UN Secretary General’s special representative in Libya, Ghassan Salame, who condemned the attacks in "the strongest terms".

"Responsibility for actions that may constitute to war crimes now lies not only with the individuals who committed the indiscriminate attacks, but also potentially with those who ordered them," Dujarric said in relaying Salame's statement.

The World Health Organization (WHO) reported on Wednesday a total of 189 people have been killed and 816 others wounded in the fighting between the UN-backed Libyan government and the East-based army in and around the capital Tripoli so far.

"WHO and health partners are coordinating mobile medical teams that are going to centers for the displaced people and treating the sick," the statement added.