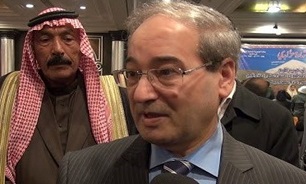 “The trip was very successful and useful and important meetings were held between Dr. Zarif and President Bashar al-Assad, the foreign minister as well as the head of the Syrian parliament,” Mekdad told the Tasnim News Agency.

The meetings indicated “the alignment and conformity” of the two sides’ views and stances on the developments in the region, especially the problems that the US government has created by its “foolish and unwise” decisions to blacklist the Islamic Revolution Guards Corps (IRGC) and to recognize Israeli sovereignty over the Golan Heights, he added.

Also in these meetings, discussions were held on the next round of Astana peace talks due to be held in the Kazakh capital of Nur-Sultan, the Syrian deputy foreign minister stated.

Heading a ranking diplomatic delegation, Zarif paid a visit to Damascus on Monday to attend meetings with top Syrian officials.

Later, he left for Turkey’s Ankara to hold talks with senior officials of the country about issues relating to Syria and North Africa.

His two-day tour of Syria and Turkey was aimed at the coordination of policies on the regional and international developments in order to ensure peace and stability in the region.