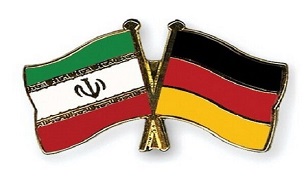 Belgian ambassador made the remarks on Wed. on the sidelines of her visit to 32nd Tehran International Book Fair (TIBF).

During his visit, she met and held talks with the head of 32nd Tehran International Book Fair Mohsen Javadi.

Belgian political system is federal and has multicultural aspects, she said, adding that for this reason, it takes time to pave way for enhancing cultural exchange with the Islamic Republic of Iran but Belgian government is determined to realize objectives of this issue seriously.

She termed cultural discussions as a suitable tool for developing and broadening ties between countries.

Belgian people are familiar with rich Iranian culture through books, films, and music and are deeply interested in acquiring more knowledge about Iranian culture, rites, and rituals.

He put the number of book titles showcased in this edition of the fair for visitors at more than 400,000, saying that most of them have been published in the recent five years.

Iran and Belgium share many commonalities in cultural and scientific terms, he said, adding, “we hope that expansion of bilateral cultural relationship will lead to the enhanced political ties.”