TEHRAN (defapress) – American former government official Richard A. Clarke discussed the risks of US-Iranian military conflict, warning Trump and Congress that the US and its allies can be hurt badly by Iran.
News ID: 77267 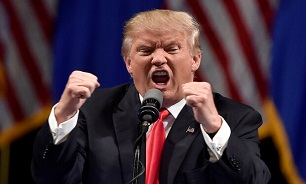 "When the US walked away from the Iran nuclear deal, it embarked upon a course of placing maximum economic pressure on the Tehran government. The goal was not to force Iran into a modified agreement with additional concessions; although not explicitly declared, it was regime change," he wrote in an op-ed published on May 6, in New York Daily News. "This was and is an unrealistic path to a new, more democratic form of government for Iran. In fact, it is likely to make such a Western-style government even further off into the future because it risks US-Iranian military conflict."

"That military conflict came one step closer in recent days. The US refused to extend secondary sanctions waivers for countries importing Iranian oil, which will have the effect of reducing Tehran’s sale of oil and its foreign currency income. In response, Iran has been sending messages through a variety of channels that it cannot stand by while the US does such significant damage to its economy," he added.

As Clarke warned, "the message from Tehran has been clear. They will attack the US or US interests, possibly using surrogates, in the Middle East. They may strike the US directly using cyberattacks. In addition to diplomatic messages through intermediaries, the Iranians have been moving forces around in ways designed to be noticed by US intelligence."

"The White House leaked that strategic bombers and an aircraft carrier strike group was being sent to the the Persian Gulf area because of Iranian activity and threats," he informed.

"US forces in Syria, Iraq and Afghanistan, as well as those based in the Persian Gulf countries are extremely vulnerable to attack by Iran’s special forces and its highly trained surrogates," the ex-US official said.

"US Navy assets in the narrow confines of the Persian Gulf could also easily come under attack from the Iranian Revolutionary Guard Corps’ hundreds of small, high speed attack boats or its armed drones. The Revolutionary Guards have been practicing overtly for such missions," he added.

"Alternatively, Iran’s cyber war units could go after US companies," he wrote.

According to Clarke, in addition to strikes on US forces and corporations, Tehran could do significant damage to US allies in the Persian Gulf region.

"What Trump and Congress need to consider now, not just after an Iranian attack, is that the US and its allies can be hurt badly by Iran," he noted.

"It is time now for cooler heads to prevail and for both sides to back away from the precipice toward which they are moving," he suggested.