We don’t want war, but ready to counter threats

TEHRAN (defapress) – Commander of the Islamic Revolution Guards Corps Major General Hossein Salami highlighted the elite force’s position at the forefront of countering the enemies, saying the Islamic Republic does not want war with any country but is ready to foil the possible threats.
News ID: 77466 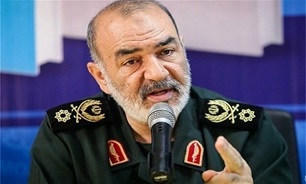 Addressing a ceremony attended by IRGC senior officials in Tehran on Saturday, Major General Salami said, “Iran is not pursuing war, but is ready to counter any possible threat.”

He noted that Washington knows engaging in such a conflict would not be in its interest.

“The difference between us and them is that they are afraid of war and don’t have the will for it,” he added.

The IRGC chief criticized the US’ political philosophy, which includes over-controlling countries and making them dependent, adding that such policies have created enemies for the American country and have reduced its power.

pointing to the complete readiness of IRGC and other Iranian armed forces to counter any possible conflict, the top commander said, we are in an intelligence war with the US and other enemies of the Islamic revolution.

"This means a combination of psychological and cyber operations, military movements, public diplomacy and intimidation," he said.

However, he reiterated that Iran is capable of defeating its enemies in all areas, including the intelligence war.