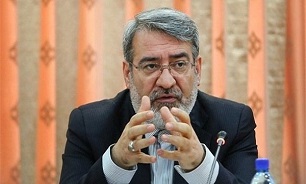 Rahmani Fazli underlined that Iran has a unified outlook at security in the region and believes that any threat to regional security may involve all other countries as well.

“Every country is entitled to defend its borders, rights and security,” he said. “As such, the Islamic Republic of Iran will defend itself with full power against any kind of aggression.”

Iran has repeatedly stressed that it has no intention to initiate a “hard” confrontation (war) against any country, Rahmani Fazli said.

In relevant remarks last Monday, Rahmani Fazli had also warned of attempts to distort regional security, describing Iran as the guardian of security in the region.

He noted that all analysts and governments were aware that they should act in a way that this integrity of security will not be damaged, adding, "Of course, Iran has always seen itself as the guardian of security in the region and has acted actively in the security, defensive and political relations in the region."

Rahmani Fazli said that Iran has dedicated the largest number of lives to the campaign against terrorism, specially the ISIL, and has always complied with its undertakings.