TEHRAN (defapress) – Iran’s President said Tehran is resolved to promote economic relations with Turkey, adding that the expansion of bilateral ties will play a major role in promoting stability and security in the region.
News ID: 77697 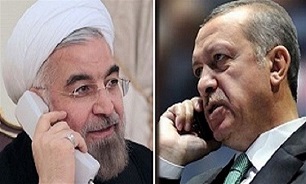 Iran and Turkey are two “powerful and influential” countries in the Muslim world, Hassan Rouhani said in a phone call with his Turkish counterpart Recep Tayyip Erdogan on Saturday.

He added that Tehran is determined to strengthen economic cooperation with Ankara and use the two countries’ national currencies in their transactions.

Iran and Turkey have agreed to step up their economic cooperation with the aim of reaching a $30-billion target set for their annual trade, voicing concern over the re-imposition by the US of unilateral sanctions against the Islamic Republic, a move which they say could affect the entire region's economy.

The Iranian president further expressed sorrow for the continued bloodshed and the killing of people in Sudan, Libya, Yemen and Afghanistan and said Iran and Turkey in cooperation with other friendly countries can put an end to the ongoing “unfortunate and dangerous” situation and properly solve the issues of the region and the Muslim world.

He also stressed the importance of bolstering cooperation between Iran and Turkey in the fight against terrorism in the region and promoting security at the common borders.

In a meeting with his Turkish counterpart in Russia’s resort city of Sochi in February, Rouhani lashed out at Western states, especially the US, for throwing their support behind terror groups.

“Unfortunately, terror groups in the region have been supported by foreign powers, especially the United States, for years,” Rouhani said.

The Turkish president, for his part, said expansion of Tehran-Ankara relations would serve the interests of the two nations and the entire region.

Erdogan added that the two countries can increase their cooperation to play further role in boosting stability and security and fighting terrorism across the region.

He slammed the unilateral and cruel sanctions imposed by the United States against Iran and emphasized that his country would not accept such restrictions.