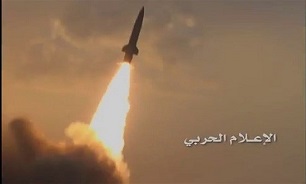 Al-Masirah TV, citing an unknown military source, said the airport had been hit with a cruise missile and that air traffic had been halted around the airport.

Before the retaliatory attack, the spokesman for Yemeni Armed Forces called on Saudi Arabia and the United Arab Emirates to put an immediate end to their military aggression against Yemen, or embrace for major surprises.

Speaking during a press conference in the capital Sana’a on Tuesday, Brigadier General Yahya Saree said Yemeni army forces, backed by allied fighters from Popular Committees, launched an airstrike against King Khalid Air Base, which lies near the southwestern Saudi city of Khamis Mushait and more than 884 kilometers (549 miles) from the capital Riyadh, the previous evening, using a squadron of domestically-manufactured Qasef-2K (Striker-2K) combat drones.

He went on to say that the attack targeted advanced radars, arms depots and control rooms in the base. Saree highlighted that King Khalid Air Base serves as one of the main bases of the Saudi-led coalition, from which many atrocious attacks are being launched against Yemeni people.