TEHRAN (defapress) –Two large oil tankers have been attacked by explosions in the Sea of Oman.
News ID: 77747 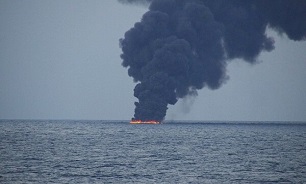 Iran’s Al-Alam television network cited local sources in Oman as saying that two successive explosions were heard in the Sea of Oman on Thursday morning.

The sources said the blasts were caused by attacks on the tankers, according to the report.

Reuters, citing four shipping and trade sources, said two tankers — identified as the Marshal Islands-flagged Front Altair and the Panama-flagged Kokuka — had been hit in suspected attacks in the Gulf of Oman, and that the crew had been evacuate from the vessels.

The crew were safe, the sources added.