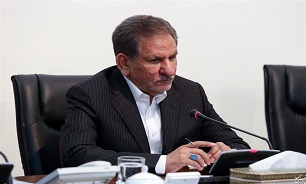 Iran is experiencing “special conditions” due to pressures imposed by the US and some regional countries, Jahangiri told reporters in the northern city of Zanjan on Tuesday.

He added that the administration’s policies to overcome the sanctions and resist the pressures should be expounded for the people and provincial officials working in economic and budgetary sectors.

“If people and economic activists are accurately informed on the country's problems, we can put this sensitive phase behind (successfully),” the first vice-president said.

Jahangiri further emphasized that “good strategies have been developed in this area”, expressing hope that Iran would overcome this critical juncture.

The remarks came against the backdrop of increased tensions between Iran and the US with Washington imposing new sanctions against the Islamic Republic.

The US has ratcheted up pressure on Iran since last year after withdrawing from the 2015 nuclear deal known as the Joint Comprehensive Plan of Action (JCPOA).

Since then, the administration of US President Donald Trump is trying to reduce Iran’s oil exports to “zero,” and has sent an aircraft carrier strike group, a bomber squad, an amphibious assault ship, and a Patriot missile battery to the Middle East to try to stack up pressure on Tehran.

Iranian officials, however, have dismissed such moves as psychological warfare, saying the country has its own ways of circumventing the American bans and selling crude oil.