Korea Won’t Stop Tests, Rejects Talks with Seoul Unless It Ends Drills with US

TEHRAN (defapress)- There will be no direct talks with South Korea if it continues to stage joint military exercises with the US, a senior North Korean diplomat stated.
News ID: 78355 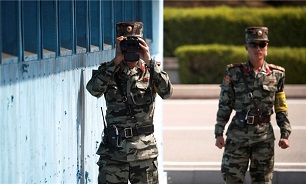 South Korea must know that “Inter-Korean contact itself will be difficult” unless “they put an end” to the ongoing joint military drill with the US, Kwon Jon-gun, director-general for American affairs at the Foreign Ministry, said on Sunday, according to RT.

Earlier in the day, the US and South Korea kicked off the main part of their 10-day computer-simulated command post exercise. The drill was due to be called Alliance 19-2 to signify the military bond between the allies but the name was ultimately dropped, ostensibly not to irritate Pyongyang, which sees all US-South Korean drills as a security threat.

The exercise’s name change, however, does not “alter its aggressive nature”, Kwon stressed, saying that direct talks with Seoul are impossible in such circumstances.

The diplomat added that “dialogue would be held strictly between the DPRK and the US, not between the North and the South”.

Pyongyang has test-fired several missiles in recent weeks, including two short-range missiles launched on Saturday. The state-run Korean Central News Agency reported that the country’s leader Kim Jong-un personally oversaw the latter test, during which the weapon’s “advantageous and powerful demand of the design was perfectly met”.

Kwon dismissed the protests by the South as “nonsense” and insisted that North Korea is free to conduct tests it deems integral to its security.

Even the US president made a remark which in effect recognizes the self-defensive rights of a sovereign state, saying that it is a small missile test which a lot of countries do.

US President Donald Trump, meanwhile, stated that he had received a letter from Kim, containing “a small apology for testing short range missiles”.

The US-North Korean negotiations made a promising start last year when Trump and Kim met face-to-face in Singapore, and Kim agreed to freeze ballistic missile tests. The second round of talks, held in Hanoi, Vietnam in February, went sour and the parties left the table, having failed to reach an agreement.

New hope for reconciliation emerged in June, when Trump again met with Kim, this time en route to a G20 event in Japan. The leaders met at the Demilitarized Zone (DMZ) between the two Koreas, and Trump became the first sitting US president to cross into North Korea.