TEHRAN (defapress)- Terrorist groups continue boosting their presence in the South of the Idlib de-escalation zone in Syria, having recently dispatched there about 470 militants and additional military hardware, the head of the Russian centre for Syrian reconciliation said on Saturday.
News ID: 78361 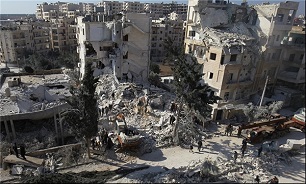 "There has been recorded a transfer of about 120 militants of the Hayat Tahrir al-Sham [terror group, formerly known as Jabhat al-Nusra], three armoured vehicles and four pickups with mounted heavy machine guns from the area near the town of Hesh," Maj. Gen. Alexei Bakin stated at a briefing, Sputnik reported.

In addition, the Ajnad al-Kavkaz terrorist group has sent to the contact line about 200 militants, five armoured vehicles, 10 pickups mounted with weapons and two trucks filled with bombs.

Near the settlement of Knedde, militants have, meanwhile, deployed 150 members of the Islamic Party of Turkestan and 13 pickups with mounted mortars, multiple launch rocket systems and heavy machine guns.

The report comes after Damascus announced on Monday that it would be resuming military operations in the provinces of Idlib and Hama, citing terrorist groups' refusal to observe the ceasefire deal that went into effect on August 1 by launching several attacks on civilians in nearby areas.