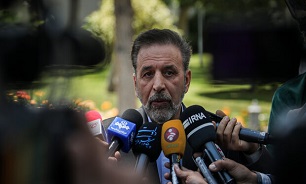 Speaking to reporters on the sidelines of a cabinet meeting, Chief of Staff of Iranian president Mahmoud Vaezi said Iran’s talks with Europe has become “more serious” since last month, noting the JCPOA joint commission’s meeting in Vienna on July 28 which was attended by Iranian deputy FM Abbas Araghchi.

Vaezi added that another meeting, to be attended by foreign minister of Iran and the three European signatories to the JCPOA, is scheduled to be held in the near future.

“In addition to [joint commission’s meetings], other countries, such as France, which has made more efforts in this regard, have held talks with us in a bid to reach a framework. We will continue our talks with the French president, and we hope to achieve whatever is to the benefit of our people and our country as defined in the JCPOA,” said Vaezi.

To a question about Iran’s decision to continue reducing commitments to the JCPOA within the framework of a third phase of measures, Vaezi said “we have more than a month before the deadline for the implementation of the third phase. The whole phase will take two months [to implement]. If we fail to reach results during the last days of negotiations, we will definitely take this step. There is no doubt about it.”

About President Rouhani's participation at the upcoming the United Nations meeting, he said "we are making the preparations for the visit. We hope that Mr. Zarif will also take part at the meeting. The foreign minister must be able to take part at important meetings of the UN."

He added that Iran's mission to the UN has sent a strong letter of protest to the Secretary General, and asked for a serious probe into the US' sanction on the Iranian foreign minister.

In a recent, controversial move, the US President Donald Trump imposed sanctions on Iranian Foreign Minister Mohammad Javad Zarif, saying that Zarif is Iran's "primary spokesperson around the world," and that the ban "is sending a clear message that Iran's "recent behavior is completely unacceptable.”

The move was both condemned and mocked by Iran, which said the sanction belied the US' empty calls for holding negotiations with Iran.

Elsewhere, Vaezi voiced hope that the tension between India and Pakistan would de-escalate as soon as possible and the Kashmiri Muslims will be treated with respect.