TEHRAN (defapress) – The Israeli regime's fighter jets have attacked over a dozen targets in the Gaza Strip.
News ID: 78657 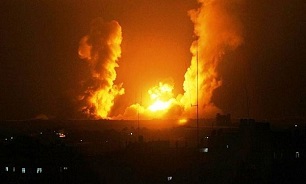 Zionist regime have stricken some targets in the Gaza Strip on Wednesday after the rocket attack from Gaza toward the Israeli port cities of Ashkelon and Ashdod on Tuesday.

Tensions between the Israelis and the Palestinians near the Gaza border have been mounting for months. Zionist regime has bombed several areas of Gaza Strip over the past few days killing and injuring dozens of Palestinians.