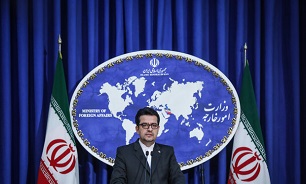 “It’s some five years since the Saudi-led coalition has been waging a war in the region through repeated aggression against Yemen and committing different war crimes. And Yemenis have shown that they stand against war and aggression.”

Pointing to US Secretary of State Mike Pompeo’s anti-Iranian remarks, Mousavi said that “such allegations and blind, fruitless remarks bear no meaning in the realm of diplomacy. In the international relation, even ‘hostility’ has a minimum logical framework and credibility and US officials have gone beyond such minimums.”

“These comments and measures seem to be plans of secret organizations and intelligence services to tarnish the image of a country in a bid to prepare the ground for measures in the future. Americans are pursuing a policy dubbed ‘maximum pressure’ which has now turned into ‘maximum lying’ due to its failures.”

Mousavi went on to say that the way to establish peace in the region and end the crisis in Yemen is to stop Saudi aggressions, end Western countries’ arms sales to Saudi-led coalition, and make efforts to find political solutions for the crisis.

This prompted US Senator Lindsey Graham to blame Iran with baseless accusations, recommending that the US “put on the table an attack on Iranian oil refineries if they continue their provocations”.

Moreover, US Secretary Mike Pompeo also pinned the blame on Tehran over the attacks calling for public condemnation of Iran's actions.

The unfounded accusations against Iran come as the United States has been a staunch supporter of Saudi Arabia's war campaign against civilians in Yemen since March 2015. According to reports, the war has claimed more than 91,000 lives over the past four and a half years. It has also taken a heavy toll on Yemen's infrastructure.