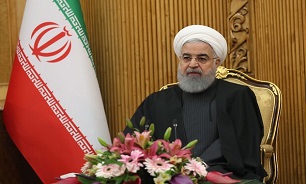 “UN General Assembly is a perfect opportunity for nations, including Iran, to express their views. And [for us] to explain to the world about the unjust measures being implemented against the Iranian nation, as well as the complicated regional issues,” Rouhani said in Tehran before departing for US.

“This year's trip to New York bears particular importance. We felt that Americans do not want the Iranian delegation to interact in the United Nations, or that they are afraid, or that our remarks are too bitter for them to hear, and they may have reasons to prevent our speech from influencing US public opinion. If they don't want this, we have to insist to go there at different levels.”

The remarks came as the US had delayed issuing visas for the Iranian delegation to attend the UNGA session.

“We have rationality and reasoning on our side,” he said, adding, “Today, we are going to the United Nations while Americans have increased their sanctions on the Iranian people to such an extent that they say there is nothing left [to be sanctioned] and they have recently restarted sanctions; that means the US' utter desperation. The US sanctions and maximum pressure have failed to bring any result for them.”

Washington announced the imposition of a new round of sanctions on Iran's Central Bank on Friday which was already under US sanctions.

Pointing to recent Yemeni attacks at Saudi Arabia’s oil installations, he said “It is clear that Americans are pursuing other objectives in the region by making allegations. The US Secretary of State is constantly making unreasonable remarks, and unfortunately, I have not yet seen this Secretary of State speaking logic, and this is among wonders of the history.”

Rouhani noted that US is organizing propaganda to exaggerate the extent of damage on Aramco facilities, adding, “The reason is that America wants to dominate the whole region and bring defense systems to the area.”

“It is clear that America seeks to control Saudi’s east oil. Of course, we have nothing to do with this quarrel; this is a US’ faceoff with China and others. They have taken advantage of this opportunity and signed a deal with Saudi Arabia to bring billions of dollars of defense systems to the region. This shows that Americans are pursuing other goals,” Rouhani said, highlighting, “All this buzz is an excuse for an increased presence of America in the region.”

“In the Aramco incident, all free thinkers of the world condemn the aggression against Yemen. This [attack] was the result of Saudi Arabia, America, UAE and Zionist aggression on Yemen. If they stop the aggression, Yemenis will not stop taking retaliatory measures.”

As Parviz Esmaeili, deputy presidential chief of staff for communications, said, in addition to delivering a speech at the high-level UNGA meeting, Rouhani will also hold talks with high ranking media officials as well as media experts. He will conduct interviews with international news agencies and will hold a presser.

Rouhani will also meet top officials from different participating countries besides the Secretary-General of UN and some presidents and heads of international bodies during his stay in New York, he added.

Elsewhere, Rouhani referred to Iran’s initiative for establishing regional security, saying, “Our proposed initiative for regional security also concerns economy and other areas. The name of this initiative is ‘Hormuz Peace Endeavor’ abbreviated as HOPE and this is a ‘hope coalition’. According to the initiative, all countries around Persian Gulf and Hormuz Strait are invited to provide the region with security.”

Because the plan has not been explained yet, reactions are not clear but Americans have expressed willingness and interest to study the initiative, he said, hoping the Iranian delegation can announce to the world in the UNGA that Tehran wants long-term peace in the region.

“We believe that the solution for the region should originate from inside. Any outside effort can never bring peace and security; as we have observed in the case of the US which couldn’t establish security wherever it set foot in the region since 2001.”