Leader meets with members of Assembly of Experts 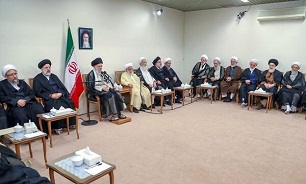 The senior clerics met with Ayatollah Khamenei after the seventh session of the Assembly of Experts that wrapped up today.

The Assembly of Experts is a clerical body, comprised of 84 members, which is tasked with electing and overseeing the performance of the Leader of the Islamic Revolution.

Ayatollah Ahmad Jannati is the head of the influential assembly. The assembly also includes President Hassan Rouhani, Sadegh Amoli Larijani, Mahmoud Alavi and Hojjatoleslam Seyyed Ebrahim Raeisi, who was appointed as the deputy chairman of the Assembly this week.