TEHRAN (defapress)- Iranian Foreign Ministry Spokesman Seyed Abbas Mousavi lashed out at the British government for adopting destructive policies in regard with the Persian Gulf region, adding that London’s lucrative arms deals with aggressors against Yemen have led the UK to echo baseless accusations against a country which has no role in attacks on Saudi oil installations.
News ID: 78830 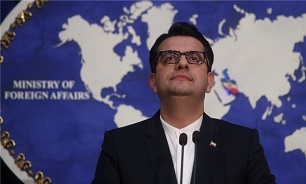 “Instead of launching a smear campaign against others, Britain needs to stop making mischief in the region, selling arms to [the Saudi-led coalition of] aggressors [operating] in Yemen and participating in what the UN has approved as crimes against humanity,” Mousavi said in a statement on Thursday.

The comments came after Britain's Foreign Secretary Dominic Raab, speaking in the House of Commons on Wednesday, pinned the blame on Iran for the September 14 Saudi oil attacks without providing any evidence for his claim.

Mousavi said the UK’s support for the aggressor side in the Yemeni war leaves no reason for the public opinion to accept the “unrealistic and one-sided” accusations by the British minister against Iran.

Blaming Britain’s political and arms support for Saudi Arabia as a key factor for the continuation of the Yemen war, the Iranian spokesman advised London to, instead of accusing others, pressure its “warmongering ally” to immediately end the destructive war on Yemen.

“Britain had better stop interfering in regional nations’ affairs and allow them to find a wise solution to put an end to the ongoing conflicts and tensions [in the region] mostly created as a result of foreign interference,” he further said, noting the UK accusations, which coincided with Iran’s recent announcement of a new initiative to ensure peace in the region, meant to undermine the proposal.

Mousavi warned that such propaganda campaign against Iran would undermine Tehran-London relations.

Several Yemeni drones targeted Aramco oil facilities in Abqaiq and Khurais last Saturday. The attacks shut down about 50 percent of the kingdom’s crude and gas production, and cut the state oil giant’s crude oil supply by around 5.7 million barrels per day. A return to normal production could take months, not weeks, according to reports.

Washington and Riyadh insist, without providing any reliable evidence, the Yemeni Houthi Ansarullah movement was incapable of launching such an elaborate assault, and accused Iran of being the perpetrator. France, Germany, and the UK have recently joined the US and Saudi Arabia in pinning the blame for the Yemeni raids on Tehran.

Iran, however, has rejected the accusations of involvement in the attack on Aramco, saying the US and Saudi Arabia's allegations that Tehran was behind the Yemeni drone attacks are out of desperation.

One of the reasons why Saudi Arabia and the US raise allegations against Iran is "their endangered prestige", Mousavi stated, adding, "It is hard for Riyadh to accept that the Yemeni nation suddenly hits a heavy blow to Saudi Arabia after 5 years of resistance and gradually attains high defense capabilities empty-handed."

Russian and China, Tehran's two important allies, have recommended against rushing to conclusions about the party responsible for the strikes on the Riyadh-owned facilities. Japan noted that Tokyo has not seen any intelligence that shows Iran was involved in the incident.

The surprise attack has already caused oil prices to jump. Market and industry experts believe that the incident could stoke already-flaring tensions in the Middle East, driving crude prices higher amid growing fears of supply shortages. The consequences of the strikes led to uncertainty in the oil market as it’s unclear when the giant company can restore operations to normal.